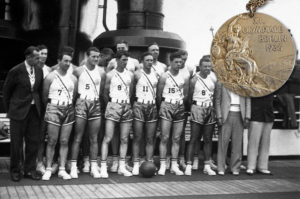 Basketball became a member of the Olympic family in 1936, but it had been a demonstration sport as early as 1904 in St Louis. The amateur tournament – there were four separate basketball tournaments held – was won by Buffalo German YMCA. 32 years later the Americans won the gold after having beaten Canada in the final 19-8. Nowadays, 19-8 may be a score after the 1st quarter in a college game, but the teams can perhaps be excused by the fact that the final – as the whole tournament – was played outdoors. And to make matters worse, the skies of Berlin really opened that day! The rain was pouring down, leaving the players soaked. USA have won all the Olympic gold medals for men except for 1972 (the (in)famous game vs. USSR), 1980 (the boycott) and 1988 (when they “only” managed a bronze).